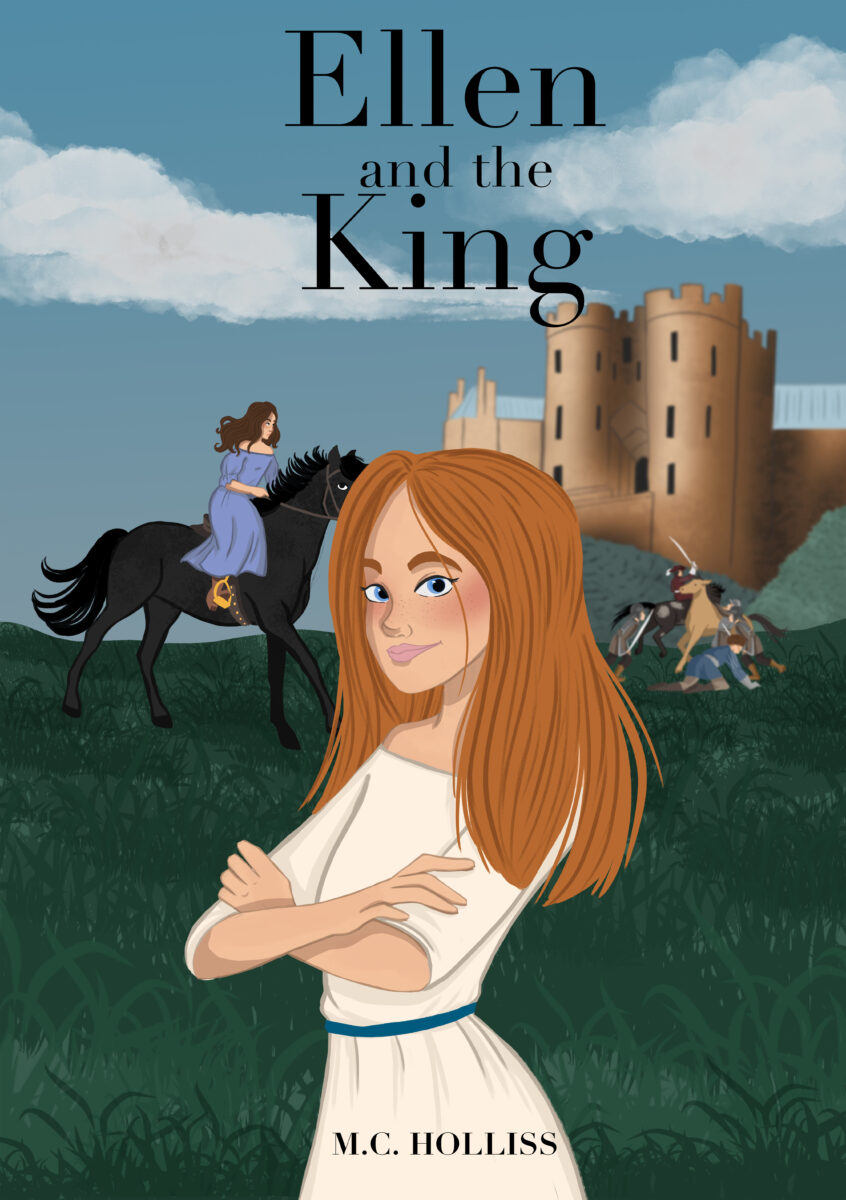 Ellen woke up suddenly. She could hear the noise of the wind in the rafters, above her head and again felt that heavy presence, watching, and waiting. She opened her eyes and tried to see what it was, lurking in the pitch-black darkness. She was too terrified to move, only daring to breathe quietly so not to make any noise. She listened intently for any slight sound that she didn’t recognise. All she could hear was her sister sound asleep in the bed next to her, breathing gently.

It was that dream again. Ellen could clearly hear the sound of hoof-beats pounding and the clash of swords. She was in the middle of a battle and around her were soldiers dressed in uniforms that she didn’t recognise.

She could see the man that she called the ‘messenger.’ He was riding hard, away from the gun smoke, his cloak flying out behind him, his black stallion’s neck flecked with white spittle.

What was he trying to tell her?  And why her?’

She lay there for some time, still too frightened to move, trying to remember how many times she had been woken by this same dream.

Eventually, sleep overtook her.  She needed plenty of rest as she had to be up early in the morning to work at the mill.

It was the same every day, even on Saturdays. She must be at her workplace at 7.00am, before school and then again, after school.

‘Ellen, Ellen!! You’re day-dreaming again,’ shouted the overseer. ‘Mind the thread on that bobbin. If it breaks and you damage the cloth, there’ll be no pay for you today,’ and he banged his stick angrily on the side of her machine.

Ellen came-to with a start. She didn’t like the man and was frightened by him. She didn’t care for his son either. He was in the same class as her at school and was also a bully.

Although she was so tiny, she was determined not to show fear.  At eleven years old, she was one of the youngest workers at the mill and was so small that one of the older workers had lent her a box to stand on, so that she could reach her machine.

She was also frightened of what they would say at home if she lost her job. Every penny was important, even though Ellen’s family were better off than most.

Their home was an ancient black and white timbered hostelry, on the main street of a little Cheshire town. Their house had once been a Tudor mansion.

Like many other families in the town, they had fallen upon hard times and, despite there being work to be found in the Old Mill, they were now forced to run the house as a hostelry.

With her morning shift over, Ellen ran home to change her apron, before school. Waving a quick hello to her mother, she grabbed a crust of bread and butter and set off.

She liked school and she mustn’t be late, so she hurried on along the cobbled street. She loved the musty, dusty smell of the classroom and the rows of neatly arranged books and the large posters of exotic lands far away. She didn’t mind sitting in the rows of desks, or the painstaking writing practice on her slate.

She really liked her teacher, but hated the overseer’s son, Vernon. He sat behind her and took great pleasure dipping her plaits in the inkwell or flicking disgusting bits of ‘spitty’ paper at her neck with his ruler.

‘What sort of a name was Vernon?’ she thought to herself, ‘and why wasn’t he made to work at the mill before school, like everyone else?’

The teacher knew how hard it was for these children to get up so early and work at the mill before and after school.  She saw Ellen as a dreamer, although a good little reader with a vivid imagination.

When the bell sounded and school finished for the day, Ellen waited for her little sister and was horrified when she saw the state of her apron.

‘Our Nan. What have you been doing? You’ll get into such trouble,’ exclaimed Ellen.

‘No why should I?  retorted Ellen.

‘Aw go on, you’ll be able to talk Ma round,’ wheedled Nan.

This conversation went on all the way home, until the last corner, when Ellen relented and the pair swopped aprons.

‘I won’t,’ laughed Nan as she skipped off. Ellen now had to face her Mother’s wrath and then work again at the mill.

Just as Ellen turned the corner onto the High street, she heard the loud sound of a horse’s hooves on the cobbled road and a small pony and trap raced past her. Hurtling across the road, it mounted the pavement and crashed into the greengrocer’s shop. It then overturned, tipping out its passenger, a little girl. Without thinking, Ellen dashed across the road to see if she was all right.

The girl was obviously stunned by the fall. Ellen quickly knelt by her side and untying her own apron, she turned it inside out, rolled it up and laid it under the little girl’s head, speaking calmly to reassure her. Ellen couldn’t help noticing the girls beautifully curled hair and her expensive clothing.

Just then the grocer and his wife came rushing out of their shop. Fruit and vegetables were scattered everywhere and potatoes were beginning to roll down the street. The grocer grabbed the reins of the pony to steady it. His wife looked anxiously at the little girl.

‘Do you know who she is?’ she asked Ellen. Ellen shook her head. ‘She’s Charlotte Sophia, the mill owner’s only daughter, from the big house.’ The Grocer’s wife then shouted to the crowd that was gathering, for someone to go and get some help.

At that moment the little girl opened her eyes and saw Ellen. ‘Stay with me please,’ she whispered and so Ellen stayed with the girl until the doctor arrived. He was shortly followed by the girl’s governess, who bustled in front of Ellen and pushed her out of the way.

Eventually more staff from the big house arrived and the butler, with an armful of blankets, lifted the little girl and carried her up the main street, in a stately manner, towards her home.

‘Well I never!’ exclaimed the Grocer’s wife, who just stood and stared after the procession.

After all the excitement of the day, Ellen was very tired. She had been given extra jobs to do at home, due to the state of her apron. Also, because she had been late arriving at the Mill, she had missed the start of her shift and the doors had been locked. This meant she had lost her wages for that shift.

As she cleared the dishes away from the front parlour at the inn, she noticed a stranger asleep in the winged chair by the fire. Moving nearer, to pick up the dish from the side table in front of him, she suddenly went very cold.

Was this the messenger in her dream? He really did look like him. Trembling, she dropped his plate and cutlery. The noise of it hitting the stone floor made the stranger wake and brought her Mother scurrying in from the kitchen.

‘Now our Ellen, what’s all this?’ she said and turned to the man. ‘I’m so sorry sir,’ said Mother quickly. ‘Think nothing of it,’ replied the stranger, stooping to pick up pieces of the broken plate. As he handed them to Ellen, his startling blue eyes met hers. She knew immediately that she had seen him before.

‘Ellen and the King’ is available on Amazon! Get your copy now to continue the adventure!

There are so many reasons to read, here just one..

Time for another reading adventure! #magicalhist